A new rapid test for earlier diagnosis of sepsis is being developed by University of Strathclyde researchers. 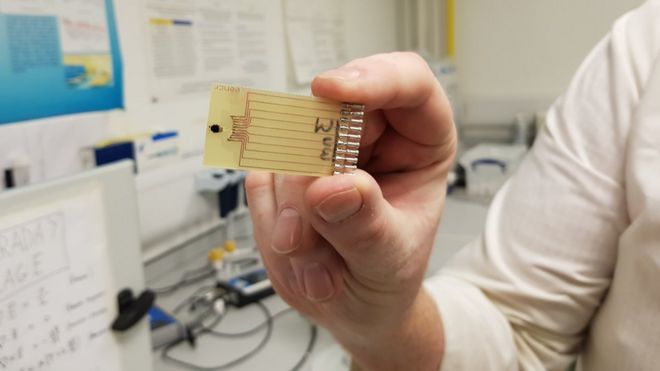 The device, which has been tested in a laboratory, may be capable of producing results in two-and-a-half minutes, the Biosensors and Bioelectronics journal study suggests.

Diagnosing sepsis can be a complex process.

The UK Sepsis Trust said it welcomed the research but added that no test was perfect at spotting the condition.

It is estimated that 52,000 people in the UK die every year from sepsis, which is a serious complication of an infection.

There is a lot of research going on to attempt to find out what exactly triggers the sometimes fatal reaction involved in sepsis.

The initial problem can be quite mild and start anywhere – from a cut on the finger to a chest or urine infection – but if left untreated can set off a cascade of reactions, from shock to organ failure and in some cases, death.

Diagnosis of sepsis is usually based on clinical judgement, body temperature, heart rate, breathing rate, and a series of blood tests.

As soon as sepsis is suspected, broad-acting antibiotics should be given to the patient.

A blood test that aims to determine the best antibiotic to treat the infection can take up to 72 hours.

The new test uses a device to detect if one of the protein biomarkers of sepsis, interleukin-6 (IL-6), is present in the blood.

Dr Damion Corrigan, who helped develop the test, said IL-6 is one of the best markers of sepsis.

“The type of test we envisage could be at the bedside and involve doctors or nurses being able to monitor levels of sepsis biomarkers for themselves.”

He said the test would work well in GP surgeries and in A&E to quickly rule sepsis in or out, if it was eventually approved through clinical trials.

Dr Corrigan added that sepsis not only kills people but can also leave them with life-changing problems, such as limb loss, kidney failure and even post-traumatic stress disorder.

The idea is that the device could be implanted and used on patients in intensive care.