China has widened its travel restrictions in Hubei province – the centre of the coronavirus outbreak – as the death toll climbed to 26. 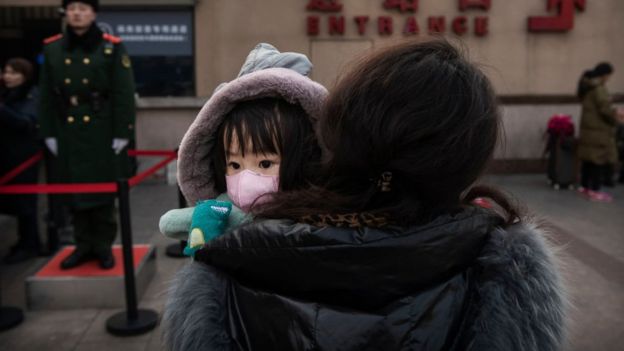 The restrictions will affect at least 20 million people across 10 cities, including the capital, Wuhan, where the virus emerged.

On Thursday, a coronavirus patient died in northern Hebei province – making it the first death outside Hubei.

Another death was later confirmed in north-east Heilongjiang province.

The province borders Russia and is more than 2,000 kilometres (1,200 miles) from Wuhan.

Nationally, there are currently 830 confirmed cases of patients infected with the virus.

A small number of confirmed cases have also been found outside China, including in Thailand, the US, Taiwan, South Korea, Japan, Vietnam and Singapore.

The growing list of restrictions comes on the eve of Lunar New Year – one of the most important dates in the Chinese calendar, when millions of people travel home.

Wuhan is effectively on lockdown: all bus, subway and ferry services have been suspended and all outbound planes and trains cancelled.

Ezhou, a smaller city in Hubei, shut its railway station. The city of Enshi has suspended all bus services.

City officials in the capital, Beijing, and Shanghai have also asked residents who return from affected areas to stay at home for 14 days to prevent the spread of the virus, local media report.