The use of electronic cigarettes by US teenagers has dramatically risen this year, a new report says. 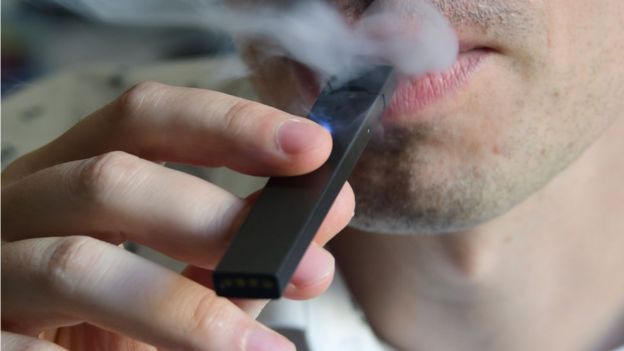 The percentage of 12th grade students, typically aged 17-18, who reported vaping nicotine rose to 21% from 11% in 2017, a survey by the University of Michigan said.

Researchers say the trend is reversing declines in the number of adolescents who use nicotine.

The survey asked students if they had vaped over the preceding 30 days.

What does the study say?

The Monitoring the Future study, based on interviews with 45,000 students across the country, said this was the largest single-year increase in its 44-year history, surpassing a surge in marijuana smoking in the 1970s.

“Vaping is reversing hard-fought declines in the number of adolescents who use nicotine… These results suggest that vaping is leading youth into nicotine use and nicotine addiction, not away from it.”

There was no significant change in the use of alcohol, marijuana, cocaine and other popular drugs, the report said, while binge drinking saw a sharp decline in 2018 among 12th grade students.

The decline in cigarette smoking by teens showed some interruption this year.

What’s behind the rise?

It is hard to say exactly. Experts blame newer versions of e-cigarettes, some of them looking like USB drivers, that can be used discreetly, and the many flavourings available.

Another reason could be that more teenagers are staying at home, communicating on smartphones, and not hanging out with friends.

Vaping tends to be an individual activity, experts say, while drinking, smoking and drug experimentation are mostly done in groups.

“Factors that make vaping so attractive to youth include its novelty and the easy concealability of the latest vaping devices, which better allows youth to vape without adults knowing about it,” Mr Miech added.

Is there anything being done?

The appeal of e-cigarettes to teens is widespread and has raised alarm in other countries too, including the UK. Many believe vaping leads to cigarette use and warn of possible long-term health consequences.

But there is little consensus about how to regulate the industry.

The US Food and Drug Administration (FDA) said in September there was an “epidemic” of use of flavoured e-cigarettes among teens.

Last month, e-cigarette maker JUUL Labs agreed to temporarily halt sales of certain flavours in the US in a bid to curb teenage use. The company also shut down its Instagram and Facebook social media channels.