Three Ebola patients left a treatment centre in the Democratic Republic of Congo after their families demanded to take them to church, according to the World Health Organization (WHO). 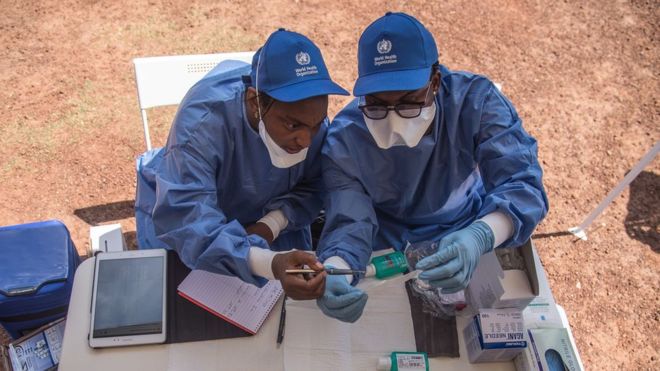 Two of the patients later died, while the third returned to the centre in the city of Mbandaka.

The patients’ relatives came to the centre, which is run by medical aid agency Medecins Sans Frontieres (MSF), and demanded to take them for prayers,

They were reportedly taken away on motorbikes and a search was ordered by the police.

One patient was found dead at home and his body was returned to the hospital for a safe burial. The other was sent back to hospital on 22 May and died that evening, according to MSF.

Efforts were made by staff to convince the patients not to leave and continue treatment, MSF says.

“However, forced hospitalisation is not the solution to this epidemic. Patient adherence is paramount,” it said in a statement.

The families of the three patients are now being monitored and some of them have been vaccinated against the disease.

Is the situation under control?

The disease’s spread from rural areas to Mbandaka, located on the Congo River, has sparked fears of it spreading downstream to the capital, Kinshasa, and to neighbouring countries.

The WHO says the outbreak has the potential to expand.

“We are on the epidemiological knife-edge,” Peter Salama, head of emergency responses at the WHO, said at a special meeting to discuss the crisis in Geneva.

“The next few weeks will really tell if this outbreak is going to expand to urban areas or if we are going to be able to keep it under control,” he added.

Health workers began an immunisation campaign to halt the spread of the Ebola virus on 21 May.

Limited trials of the experimental vaccine was rolled out during the epidemic in West Africa in 2014-16, which killed more than 11,300 people.