A man who ate the world’s hottest chilli pepper in a chilli-eating contest ended up in hospital after experiencing “thunderclap” headaches. 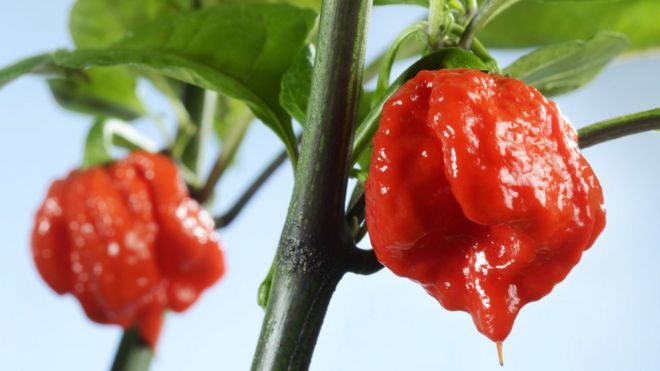 The 34-year-old man had eaten one Carolina Reaper chilli in the contest in New York State.

The “crushingly painful” headaches came on in the next few days.

His experience has been published in the BMJ Case Reports as it is the first case to be associated with eating chilli peppers.

The doctor who reviewed his case has warned anyone eating hot chilli peppers to seek medical attention immediately if they experience sudden onset headaches.

“Thunderclap” headaches are caused by the sudden tightening of the vessels that supply blood to the brain, a condition known as reversible cerebral vasoconstriction syndrome (RCSV).

Immediately after eating at the contest, the man experienced dry heaves.

Severe neck pain developed over the next few days along with debilitating severe headaches, lasting just a few seconds at a time.

The pain was so bad he went to the emergency room and was tested for various neurological conditions, but the results were negative.

A CT scan showed that several arteries in his brain had constricted, leading doctors to diagnose him with RCVS.

RCVS does not always have an obvious cause, but can occur as a reaction to some prescription medication, or after taking illegal drugs.

This is the first case to be associated with eating chilli peppers. Previously eating cayenne pepper has been linked to sudden constriction of the coronary artery and heart attacks.

The man’s symptoms cleared up by themselves. And a CT scan five weeks later showed that his arteries had returned to their normal size.

Generally RCVS resolves within days to weeks and often has a favourable long-term prognosis, but in some cases severe vasoconstriction resulting in a stroke have been reported – but they are very rare.

Dr Kulothungan Gunasekaran, at the Henry Ford Hospital in Detroit, who wrote the report, said people need to be aware of these risks, if eating the chilli.

“We would not advise against eating Carolina Reaper at this time, but we would recommend the general public be cautious about these adverse effects and we advise that they should seek medical attention immediately if they develop sudden onset headache after eating hot peppers.”