Plants have been “hijacked” to make polio vaccine in a breakthrough with the potential to transform vaccine manufacture, say scientists. 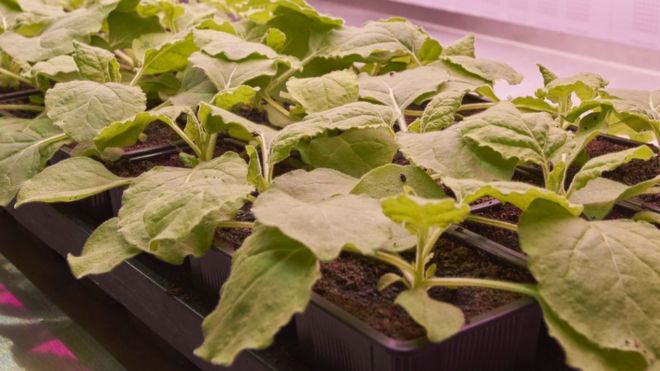 The team at the John Innes Centre, in Norfolk, says the process is cheap, easy and quick.

As well as helping eliminate polio, the scientists believe their approach could help the world react to unexpected threats such as Zika virus or Ebola.

Experts said the achievement was both impressive and important.

The vaccine is an “authentic mimic” of poliovirus called a virus-like particle.

Outwardly it looks almost identical to poliovirus but – like the difference between a mannequin and person – it is empty on the inside.

It has all the features needed to train the immune system, but none of the weapons to cause an infection.

The scientists hijacked a relative of the tobacco plant’s metabolism to turn its leaves into polio-vaccine “factories”.

First, they needed to create new instructions for the plant to follow.

The starting material was the genetic code for making the outer surface of poliovirus.

It was enhanced by combining it with material from viruses that naturally infect plants.

The new instructions were then put into soil bacteria, which were used to infect tobacco.

The infection took hold, the plants read the genetic instructions and started making the virus-like particles.

Infected leaves were mixed with water, blended, and the polio vaccine was extracted.

The virus-like particles prevented polio in animal experiments, and an analysis of their 3D structure showed they looked almost identical to poliovirus.

“I would hope we get vaccines produced in plants in the not too distant future.”

The research is funded by the World Health Organization, as part of efforts to find replacements for the polio vaccine.

Polio – which can cause permanent paralysis – is a thing of the past for most of the world, but the infection has not been eradicated.

And using weakened poliovirus in current vaccines poses a risk of the virus regaining some of its dangerous traits – called vaccine-derived poliovirus.

Dr Andrew Macadam, principal scientist at the UK’s National Institute for Biological Standards and Control, said: “Current vaccines for polio are produced from large amounts of live virus, which carries a threat of accidental escape and re-introduction.

“This study takes us a step closer to replacing current polio vaccines, providing us with a cheap and viable option for making virus-like particle-based vaccines.”

But this technology is not limited to polio or even just to vaccines.

As long as researchers have the right sequence of genetic code, they can make a vaccine against most viruses.

And they have also used plants to make antibodies like those being used in cancer therapy.

Plants are also being investigated as a new source for the winter flu jab.

Currently, it is grown in chicken eggs and takes months to develop.

Prof Lomonossoff told the Surgical- Blog: “In an experiment with a Canadian company, they showed you could actually identify a new strain of virus and produce a candidate vaccine in three to four weeks.

“It has potential for making vaccines against emerging epidemics, of course recently we had Zika and prior to that we had Ebola.

“It’s highly responsive, and that’s one of the great attractions of the technology.”

The plants have the advantage of growing quickly and needing only sunlight, soil, water and carbon dioxide to grow.

It means it could be a cheap and low-tech solution to vaccine development.

But there are still issues to resolve, including making vaccine on a large scale.

Another issue is whether there is any risk from using plants to make the vaccine – does the tobacco-relative mean there is nicotine in the vaccine?

“However, there are very few plant-based vaccine manufacturers and almost no licensed human vaccines that are currently produced in plants.”

Denis Murphy, a professor of biotechnology at the University of South Wales, said: “This is an important achievement.

“The challenge is now to optimise the plant expression system and to move towards clinical trials of the new vaccine.”