Tests on major brands of bottled water have found that nearly all of them contained tiny particles of plastic. 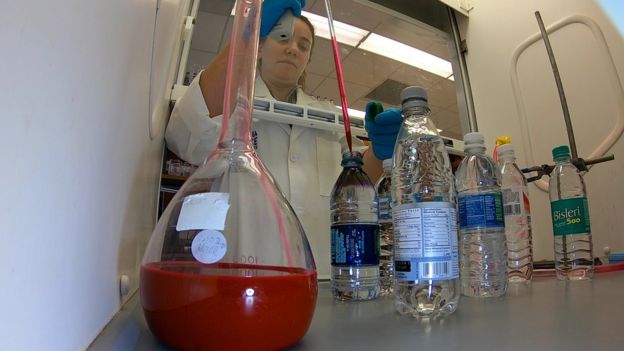 In the largest investigation of its kind, 250 bottles bought in nine different countries were examined.

Research led by journalism organisation Orb Media discovered an average of 10 plastic particles per litre, each larger than the width of a human hair.

“It’s not about pointing fingers at particular brands; it’s really showing that this is everywhere, that plastic has become such a pervasive material in our society, and it’s pervading water – all of these products that we consume at a very basic level.”

Currently, there is no evidence that ingesting very small pieces of plastic (microplastics) can cause harm, but understanding the potential implications is an active area of science.

Contacted to comment on the findings, the companies behind the brands have insisted that their products meet the highest standards for safety and quality.

They also point to the absence of any regulations on microplastics and of the lack of standardised methods of testing for them.

Last year, Prof Mason found plastic particles in samples of tap water and other researchers have spotted them in seafood, beer, sea salt and even the air.

This latest work comes amid growing international attention on plastic, fuelled by acclaimed Blue Planet 2 series in which Sir David Attenborough highlighted the threat of plastic waste in our oceans.

The research into bottled water involved buying packs from 11 different global and national brands in countries chosen for their large populations or their relatively high consumption of bottled water. These were:

Nestle told us its own internal testing for microplastics began more than two years ago and had not detected any “above trace level”. A spokesman added that Prof Mason’s study missed key steps to avoid “false positives” but he invited Orb Media to compare methods.

Gerolsteiner also said it had been testing its water for microplastics for a number of years and that the results showed levels “significantly below the limits for particles” set for pharmaceutical companies. It said it could not understand how Prof Mason’s study reached its conclusions.

It also said its measures exceeded industry standards but added that microparticles are “everywhere” so “the possibility of them entering the product from ambient air or packaging materials during the bottling process can therefore not be completely ruled out”.

Coca-Cola said it had some of the most stringent quality standards in the industry and used a “multi-step filtration process”. But it too acknowledged that microplastics “appear to be ubiquitous and therefore may be found at minute levels even in highly treated products”.

Danone said it could not comment on the study because “the methodology used is unclear” but added that its own bottles had “food grade packaging”.

It pointed out that there are no regulations on microplastics or a scientific consensus on how to test for them, and it also highlighted a much smaller German study last year that found plastic particles in single use bottles but not above a statistically significant amount.

It described the science of microplastics as “an emerging field, in its infancy, which requires further scientific analysis, peer-reviewed research and greater collaboration across many stakeholders”.