Nerves inside paralysed people’s bodies have been “rewired” to give movement to their arms and hands, say Australian surgeons. 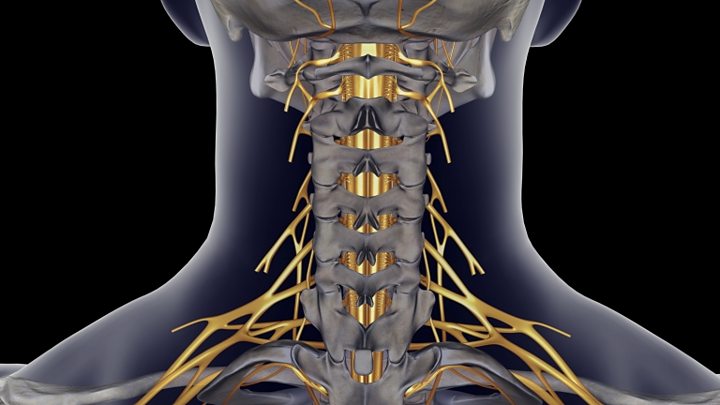 Patients can now feed themselves, put on make-up, turn a key, handle money and type at a computer.

Paul Robinson, 36 from Brisbane, said the innovative surgery had given him independence he had never imagined.

Completely normal function has not been restored, but doctors say the improvement is life-changing.

How does the procedure work?

Injuries to the spinal cord stop messages getting from the brain to control the rest of the body. The impact is paralysis.

Patients in the trial had quadriplegia affecting movement in all their limbs.

But crucially they were still able to move some muscles in their upper arms.

The functioning nerves leading from the spinal cord to these muscles were then rewired.

The nerves were cut and then attached to nerves that control other muscles – such as for extending the arm or opening or closing the hand.

For example, nerves that once turned the palm up to face the ceiling could be used to extend all the fingers in the hand.

So now when a patient thinks of rotating their hand, their fingers extend.

“We believe that nerve transfer surgery offers an exciting new option, offering individuals with paralysis the possibility of regaining arm and hand functions to perform everyday tasks, and giving them greater independence and the ability to participate more easily in family and work life,” said Dr Natasha van Zyl from Austin Health in Melbourne.

Paul Robinson was one of the patients on the trial.

In February 2015 he came off his dirt bike and the crash damaged the spinal cord in his neck.

“I had no movement in my hands or fingers, no movement from the arm down and weakness in my shoulders,” he said.

He had to move back in with his parents and needed help with tasks like cutting up his food.

Two days before Christmas Day 2015 he had his nerves rewired, which he called one of the most painful experiences of his life.

He then began the process of recovery and the physiotherapy to relearn how to move his hands and arms.

“I play sport (wheelchair rugby) and am studying engineering.

“It’s made a huge difference in my life – being able to cut up food, hold normal cutlery and use a pen to write at university.”

Will this work for all patients?

It depends on the type of injury.

If the injury is so far up the spinal cord that it causes complete paralysis then there will be no functional nerves to rewire.

And the procedure would be unnecessary if the injury was further down the back and the arms were unaffected.

“So it’s a big group of patients that can benefit from it,” Dr Natasha van Zyl said.

Is it always successful?

In the study, published in the Lancet, 59 nerve transfers were performed in 16 patients.

It failed on four occasions, including two patients who had a permanent reduction in sensation.

The surgery is most successful when performed between six months and a year after the initial injury.

What do experts say?

She said it was important for patients to have surgery soon after the injury, but hoped it could be used “throughout the world”.