A key component of the UK’s first high-energy proton beam machine has been delivered to its new home in Newport. 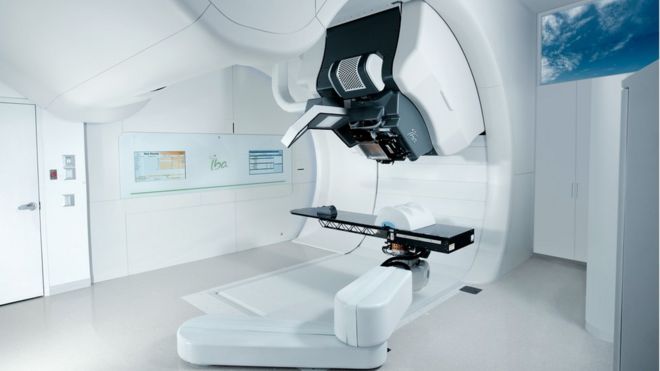 Proton Partners International (PPI) received the part that will fire the cancer-treating beam at its Rutherford Cancer Centre.

PPI said the UK’s “most-advanced piece of cancer machinery” could transform treatment for 500 patients a year.

The Welsh Government said proton beam therapy will be available at the centre to NHS Wales patients with certain cancers “within the next year”.

PPI chief executive Mike Moran said it was the “most strategic health project in this country in decades”.

“It’s significant for the people of Wales to have high-energy proton beam therapy available,” he added.

He said the treatment would “certainly improve” clinical outcomes and the experience for patients, who up to now have had to spend up to six weeks abroad to get proton beam therapy.

The use of proton therapy was highlighted by the case of five-year-old Ashya King, whose parents took him to the Czech Republic for treatment for a brain tumour three years ago.

After its installation, the machine will be up and running next year.

PPI said treatment at the centre will be available to medically-insured private patients, self-paying patients and patients referred by the NHS.

This is certainly a coup for those trying to make Wales a hub for health innovation and research.

But it is unclear how many of the 500 patients a year expected to be treated at the privately run centre will be from the Welsh NHS.

That is because the NHS in England is currently building two similar proton beam centres “in-house”.

Located at established hospitals (in London and Manchester), some argue they’d be better placed to provide more comprehensive, “wrap-around” care than would be possible at a stand-alone centre.

Discussions between the company, the Welsh Government and Welsh NHS I’m told are well advanced but whatever the outcome of those, as the first centre of its type in the UK, this is certainly a significant development.

Proton beam therapy is a highly-targeted type of radiotherapy which can treat hard-to-reach cancers, such as spinal tumours, with a lower risk of damaging the surrounding tissue and causing side effects.

Experts have said the proton beam clinic in Newport could halve that cost, while also allowing patients to remain close to their families while receiving treatment.

PPI is building three more proton beam centres in the UK – in Northumberland, Reading and Liverpool.