A woman has suffered chemical injuries after she was mistakenly prescribed erectile dysfunction cream for a dry eye condition. 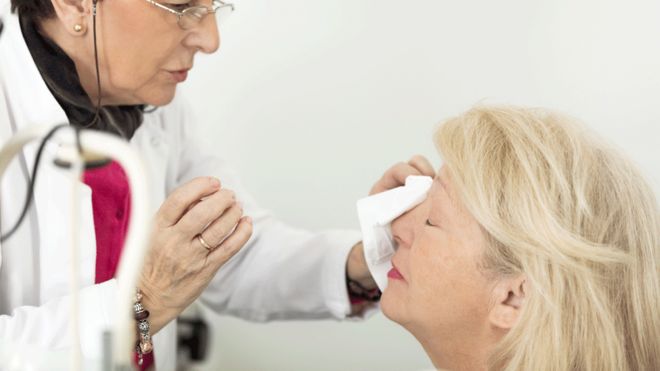 The woman, from Glasgow, had to be treated at A&E after she was given Vitaros cream instead of the eye lubricant VitA-POS.

Her experience is detailed in December’s BMJ Case Reports journal.

The report calls for doctors to use block capitals in handwritten prescriptions to avoid errors.

The woman was given a handwritten prescription for VitA-POS, a liquid paraffin lubrication, for treatment of severe dry eyes and corneal erosions.

The mix-up happened between her GP and pharmacist, where she was issued with Vitaros, an erectile dysfunction cream.

After using it she suffered eye pain, blurred vision, redness and swollen eyelid.

The mild chemical injury to her eye was treated in hospital with topical antibiotics, steroids and lubricants, which cleared it up in a few days.

Dr Magdalena Edington, from Glasgow’s Tennent Institute of Ophthalmology, wrote the report for the December edition of BMJ Case Reports.

In it, she said: “Prescribing errors are common, and medications with similar names and packaging increase risk.

“However, it is unusual in this case that no individual, including the patient, general practitioner or dispensing pharmacist, questioned erectile dysfunction cream being prescribed to a female patient, with ocular application instructions.

“We believe this to be an important issue to report, to enhance awareness and promote safe prescribing skills.”

Although many prescriptions are digitised rather than handwritten, she wants to raise awareness that medications with similar spellings exist and encourage prescribers “to ensure that handwritten prescriptions are printed in block capital letters (including the hyphen with VitA-POS) to avoid similar scenarios in the future”.

Data released last year suggested GPs, pharmacists, hospitals and care homes may be making 237 million prescription errors a year – the equivalent of one mistake for every five drugs issued.

The errors include wrong medications being given, incorrect doses dispensed and delays in medication being administered.

The study said most caused no problems, but in more than a quarter of cases the mistakes could have caused harm.

Robbie Turner, director of pharmacy at the Royal Pharmaceutical Society said the organisation was “sorry” to hear about what happened to this patient.

“Mistakes are taken very seriously by pharmacists, who work hard to ensure patient safety, knowing the harm they can cause.

“Most prescriptions these days are electronic, removing errors due to handwriting. Whatever the particular reasons for this error, collaboration between pharmacists and prescribers makes care safer and helps reduce mistakes.”

“Most GPs now use digital systems to ensure the right medication is being prescribed to the right person, with several online prompts to make sure they are satisfied with the choice of drug, dosage, and length of prescription.

“These systems have substantially reduced the likelihood of prescribing errors – but it is still important to maintain open and rapid channels of communication between GPs and pharmacists, so that if there are any queries regarding a patient’s medication they can be answered.”