Children as young as 11 are being treated for abusing the anxiety drug Xanax, Drugs charity Addaction said it was also aware of 13-year-olds “dealing” the tranquiliser on school premises. 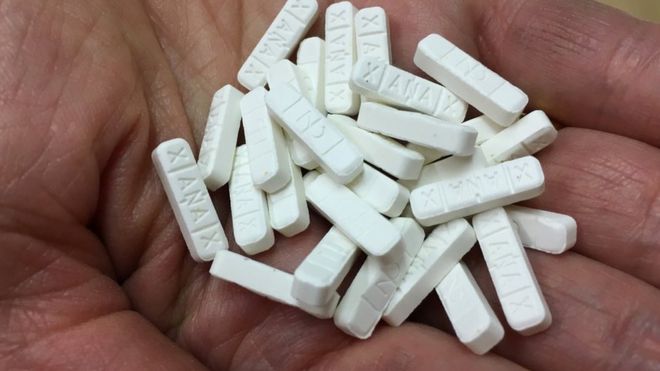 One teacher said he feared pupils had made an assumption that taking Xanax was safer than using illegal drugs.

Xanax, the brand name for the drug Alprazolam, is used to treat anxiety and panic attacks.

It is widely prescribed in the US and can be obtained on private prescription in the UK. But among some teenagers and young adults in Britain it is increasingly being abused.

Nick Lind, deputy head of Redland Green School in Bristol, said that, over the last 18 months, he had written several letters to parents about Xanax abuse.

He said he was concerned that the abuse of prescription medication had become a trend, and that pupils believed it was “a safe alternative to illegal drugs”, obtaining supplies mainly from the dark web.

“Students are finding out that that’s the drug that’s available, they’ve seen other people using it. Sometimes it’s mentioned, because it is an anti-depressant and an anti-anxiety drug.

“Because it’s seen as a prescription drug and therefore not seen necessarily by some people as dangerous because it is prescription, they don’t understand the risks. They think it’s a safe way of getting into drugs.”

Kerry Robinson, a paediatrician at London’s Whittington Hospital, said she had treated children aged under 16 for Xanax abuse.

“The cases that I’ve seen it’s not a recreational party drug,” she said. “Young people have taken it during the school day, then stumbled into their next lesson and someone has picked up that things are not right.”

She said symptoms included slurred speech, unsteadiness, and looking drunk, but without the lack of inhibition associated with alcohol.

Addaction said it was “concerned” by the number of teenagers it was helping that had addiction problems related to the drug.

Neil Coles, from Addaction, said that he and his colleagues were providing advice and support to a number of children as young as 13 caught using and “dealing” Xanax.

He said: “I don’t think a lot of young people realise what Xanax is. They don’t realise that it’s a benzodiazepine.

“So we’re seeing a lot of young people who don’t realise the dosage, they’re taking far too much, collapsing on school premises, and therefore having to be taken to hospitals.”

Mr Coles said teenagers were also buying the raw ingredients from the dark web to produce their own version of the drug.

That means many other teenagers fail to realise that the Xanax they are buying is not of pharmacy grade and is instead counterfeit, he added.

One 17-year-old, who wished to remain anonymous, said he started taking Xanax at 14 to calm his anxiety. He said he had mixed the drug with alcohol, and ended up in hospital “a couple of times”.

A Home Office statement said firm action was being taken “to prevent the harms caused by drugs”.

It added: “Law enforcement agencies continue to work with internet providers to shut down UK-based websites found to be selling these drugs illegally.”