The number of suspected cases of cholera resulting from a severe outbreak in Yemen has passed 100,000, the World Health Organization says. 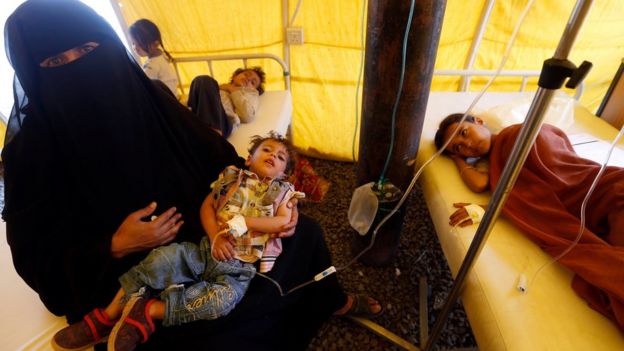 A total of 798 deaths associated with the disease have been recorded in 19 out of 22 provinces since 27 April.

The charity Oxfam said the epidemic was killing one person almost every hour.

Yemen’s health, water and sanitation systems are collapsing after t

The authorities in the rebel-controlled capital Sanaa, which has recorded the highest number of cases, declared a state of emergency on 14 May.

More than half of the country’s health facilities are no longer functioning, with almost 300 having been damaged or destroyed in the fighting.

Health and sanitation workers have not been paid for eight months; only 30% of required medical supplies are being imported into the country; rubbish collection in the cities is irregular; and more than 8 million people lack access to safe drinking water and proper sanitation.

The OCHA said the risk of the epidemic spreading further was compounded by the rainy season, widespread food insecurity and malnutrition.

The war has left 18.8 million of Yemen’s 28 million people needing humanitarian assistance and almost 7 million on the brink of famine.

Oxfam’s Yemen country director, Sajjad Mohammed Sajid, meanwhile warned that the outbreak was set to be one of the worst this century if there was not a massive and immediate effort to bring it under control.

“Cholera is simple to treat and prevent but while the fighting continues the task is made doubly difficult. A massive aid effort is needed now,” he said.

“Those backers of this war in Western and Middle Eastern capitals need to put pressure on parties to the fighting to agree a ceasefire to allow public health and aid workers to get on with the task.”

A Saudi-led multinational coalition – backed by the US and UK – launched a military campaign in support of President Abdrabbuh Mansour Hadi in March 2015. Since then, at least 8,050 people have been killed and 45,100 others injured.